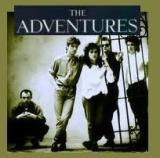 THE ADVENTURES was first introduced here in MANILA by WXB102 wayback late 1985 by playing the extended version of their classic "TWO RIVERS" which incidentally was #2 on the WXB TOP 102 MOST SEQUESTERED SONGS poll which was held last 2006. I also remembered the song hitting the #1 spot on the late evening XB Show "TOP 10 MOST SEQUESTERED SONGS" back in 1986. Their second Manila Hit would be "SEND MY HEART" which was taken also from their debut album "THEODORE AND FRIENDS". YUP!! All Pinoy Wavers have this album on their collection.

In 1988, NU107 introduced their second album "THE SEA OF LOVE" by playing "HEAVEN KNOWS WHICH WAY" which also bacame a hit on Manila New Wave Airwaves both on NU107 and DZBM POWER105 and was even included on the Philippine released compilation Vinyl "THE BEST OF NEW MUSIC 2". Then came "BROKEN LAND" which became an instant POWER105 classic because of the song's relation on CHEL D. "WHEN YOUR HEART WAS YOUNG" would be the last Manila Hit from this album and the band and Pinoy Wavers would definitely have also a copy it. HE HE HE!!

In 1989, THE ADVENTURES 3rd album "TRADING SECRETS WITH THE MOON" was introduced by DZBM POWER 105 by playing the song "YOUR GREATEST SHADE OF BLUE" but unlike the previous two albums, this album didn't really made a great impact here in Manila but still a relatively Pinoy Waver's collectors item.

THE ADVENTURES was the New Wave Band from Belfast who moved to London which was formed in 1984 headed by TERRY SHARPE on vocals who came from the late 70s group "THE STARJETS". The band released four albums and became famous here in Manila during the XB,BM, and NU days.

This is the adventure of
THE ADVENTURES!!
-DR. STIRRING RHOD

Posted by DrStirringRhod at 9:03 AM No comments:

As the Legendary DZBM POWER 105 DJ CHEL D.'s famous farewell lines after her radio show back in 1988-90 would go:
"GOTTA GO, GOTTA HIKE, GOTTA DO SOMETHING WITH MY LIFE,CATCH YOU BACK TOMORROW SAME PLACE,SAME TIME...Bye Francis!! ....Bye Marvin!!"
........... then THE ADVENTURES' "Broken Land" INTRO starts to spin on POWER105's turntable.

BROKEN LAND lyrics
- THE ADVENTURES
(from the album: THE SEA OF LOVE)
These rivers run too deep
With schemes of men for days that lay ahead
They sell their souls so cheap
They breed mistrust and fill my heart with dread
When did the boy become a man
And lose his life to learn

So much confusion to this plan
These times are not changing

Show me the love to keep us together
Open up your hearts don't turn me away
Comfort me through this stormy weather
From where I stand, I see a broken land

With no exception to the rule
These times are not changing

-DR. STIRRING RHOD
Posted by DrStirringRhod at 11:40 AM No comments:

Well, 1998 was a year of 80s and New Wave compilation releases here in MANILA both Official and Bootleg. An Official Philippine release of Universal Records in 1998 was "THE BEST 80's PARTY ALBUM ...EVER!" compilation CD under Avex Trax. Three sequel CDs were also released on 1999 and 2000 namely" Volumes 2&3, and Non-Stop Party album". Basically, I didn't buy these four CDs back then because it really contains the most common 80's and New Wave songs , but when there was a Universal Record Sale last year and I saw these CDs for sale in a much more cheaper price then I decided to get the copies for listening purposes while driving ..... at least they're not burn CDs. He He He! YUP!! I still find it as a cool 80s compilation. The series contains music from Naked Eyes, Al Corley, Men At Work, Pointer Sisters, A Flock Of Seagulls, Human League, Camouflage, Yazoo....and many more to mention! Of course, there's also a New Wave flavor in it but it's just Shallow and not Deep. He He He!! 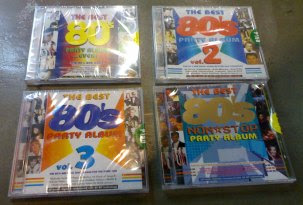 I uploaded three songs from the compilation series:

Posted by DrStirringRhod at 12:47 PM 2 comments: 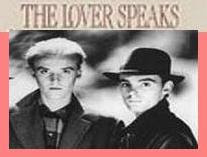 THE LOVERS SPEAKS was the NEW WAVE duo of David Freeman on vocals , and Joseph Hughes who was mostly the composer and the arranger of the band. Every PINOY NEW WAVER like me would definitely have their "Self-titled" debut album either on Vinyl or on CD format. The band actually derived their name from a book entitled "A Lover's Discourse: Fragments" written by Roland Barthes back in 1985.THE LOVER SPEAKS was first introduced here in MANILA by DZBM POWER105 wayback late 1986 just before the station would hybernate momentarily into a Jazz Station and went back to New Wave on December 1987 to give NU107 a tough competition on Manila's NEW WAVE Airwaves. POWER105 first played their classic hit "NEVER TO FORGET YOU" in 1986 from their "Self-titled THE LOVER SPEAKS" album and became one of their so-called "POWER EXCLUSIVES" back then. I consider this as one of the Greatest Discoveries of POWER105 indeed. It was only in 1987 when the band's second Manila Hit "NO MORE I LOVE YOU'S" would also be played by none other than POWER105. Definitely this debut album has a lot of great songs in it. SULIT TALAGA!! Another personal favorites would be "TREMBLE DANCING" and "THIS CAN'T GO ON" which were also mainstays on 103.5 KLite's LITEWAVE. 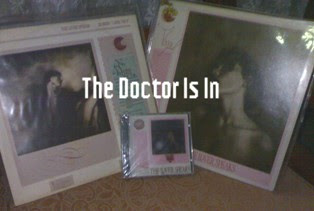 Well, I just got a bonus when I was also able to purchase their Vinyl EP of "NO MORE I LOVE YOU'S which also became a hit on 89DMZ's WAVE180 back in 1995 since that was the year NU107 introduced the version of ANNIE LENNOX on Manila's airwaves.

ANNIE LENNOX version of "NO MORE I LOVE YOU'S"which was taken from her "MEDUSA" album made it big worldwide. Indeed it gave the song more exposure. "MEDUSA" also includes a remake of THE CLASH's "TRAIN IN VAIN" and BLUE NILE's "DOWNTOWN LIGHTS" which for me was also a very interesting album from Annie Lennox. It wouldn't be a surprise since THE LOVER SPEAKS has opened up before with THE EURYTHMICS on their 1986 "Revenge Tour" and DAVE STEWART himself was responsible for signing the band at A&M Records on their debut album back in 1985.

THE LOVER SPEAKS then recorded their second album in 1988 entitled "THE BIG LIE" which includes 9 new tracks but the band encountered problems releasing this material from A&M Records the same outfit that released their Self-titled debut album.

From their second album:
Thunder No One Else Can Hear: http://download.yousendit.com/4493768D2C773BEA

As THE LOVER SPEAKS
...No More I Love You's!!
-DR. STIRRING RHOD
Posted by DrStirringRhod at 3:30 PM 1 comment: 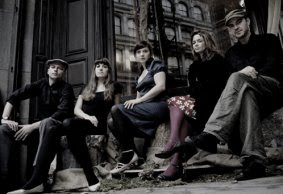 Last year I was able to get a chance to hear the music of this French Cover Band "NOUVELLE VAGUE" when I visited MUSIC ONE. Their two CDs (Self-titled and Bande a Part) were made available here in MANILA around JUNE2007 then I was really surprised reading their tracklist so I decided to listen to both their albums via the "listening booth" of MUSIC ONE. Well, it's Bossa Nova indeed and last year there was a great upsurge of Bossa Nova Music here in Manila from Local and Foreign Acts. I bought both CDs and I find it as another Relaxing Pair of CDs that PINOY WAVERS could listen to. New Wave Music in a different arrangement that would perk up your listening pleasures especially if you're on the same Musical Genre as I am.

Nouvelle Vague is a French Act compose of Marc Collin and Olivier Libaux who resurrected classics from the New Wave Music era, and reinterpreted them in a Relaxing Bossa Nova style.
They released three albums, but as of writing only two of them are available here in Manila. Music from bands like MODERN ENGLISH, JOY DIVISION, XTC, ECHO AND THE BUNNYMEN, THE UNDERTONES, THE CLASH, DEPECHE MODE and many many more NEW WAVE acts included on this great compilation.

My 10 personal favorites on the two CDs I bought were:

LOVE WILL TEAR US APART- Originally by JOY DIVISION
http://download.yousendit.com/C4D115AA4C17ED3E

I MELT WITH YOU- Originally by MODERN ENGLISH
http://download.yousendit.com/12C4CBB454423818

DANCING WITH MYSELF- Originally by GENERATION X
http://download.yousendit.com/5C67B00000E5D1F5

SO PINOY WAVERS GET YOUR COPIES NA!! SULIT NAMAN!!

Jennifer Adriano Molina popularly known as "ROSANNA ROCES" or "OSANG" in the PHILIPPINE ENTERTAINMENT ARENA would you believe is an avid NEW WAVE FAN? YUP!! This Sexy Filipina Actress have even confirmed that she was an avid XB listener back in the 80s. Whenever I mention "XB days" here in my Blog I refer to the good old days of XB circa 1985-1987 . A very controversial Sexy Actress indeed, some termed her as "THE SEX BOMB".

It was year 2004 when she was invited by 103.5 Klite DJ RON SOUTH to guest on his LITEWAVE "Your Ultimate New Wave Archive" show and she agreed to do so.

Unfortunately, I was unable to attend her LITEWAVE guesting but instead I listened over the Radio. It was indeed a great show wherein she was interviewed by DJ RON SOUTH about her Musical Interests and about NEW WAVE. She even mentioned having an I-Pod full of New Wave music. Huh? I-Pod was still expensive back then. Sosyal ang Lola ninyo!! He He He!

I guess the Highlight of the show was when she listed and mentioned her TOP 5 New Wave Songs of the era and DJ RON SOUTH played all 5 of them in ascending order from #5 to #1 Top Pick. I was able to jot it down. Well, here It is I'm going to post it on my Blog. That was her TOP 5 back then, and like most of us our personal favorites would change by time. 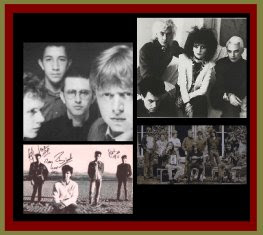 ROSANNA's TOP 5 New Wave Songs (LITEWAVE 2004 list)
1) The Pan Within- THE WATERBOYS
2) Total Recall- THE SOUND
3) My Boyfriend Is A Communist- MISS KIMBERLY
4) Tears- THE CHAMELEONS U.K.
5) Hongkong Garden- SIOUXSIE AND THE BANSHEES

Let's welcome the NEW YEAR!! My first post this year so I decided to share 6 songs for 2008 in this blog.

All music that I share here in my BLOG are for Promotional Use only so I usually use "YOU SEND IT" so that the song links will not be permanent and could only be downloaded for 7 days. So if you have the chance to buy the Original Materials then support these artists.HOPE YOU GET TO ENJOY this first threat of mine. THANKS AGAIN for visiting my Blog! Come Back again soon!!

Posted by DrStirringRhod at 12:49 PM No comments: