Let's go BACK TO THE FUTURE!!

It was year 1985 when "BACK TO THE FUTURE" was shown here in Manila, but I wasn't able to watch it on the big screen. It became an international hit and it was the highest grossing film of 1985. I've watched all Trilogy on BETAMAX and I could still remember those times when you can borrow Betamax Tapes here in Manila for only 5bucks. A film written by Bob Gale and Robert Zemeckis and directed by Zimeckis himself, it's about a High School dude portrayed by MICHAEL J. FOX as MARTY MCFLY who had an automobile that could do Time Travel. The plot of all sequels was very interesting because different Time Zones were involved that included the 1800s,1900s and the year 2000 specifically 2015. 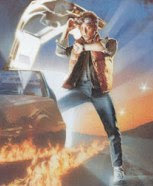 And who would forget scientist "Dr. Emmett Brown" better known in the trilogy as "Doc" was portrayed by CHRISTOPHER LLOYD. Of course, LEA THOMPSON who is also favorite among 80s people here in MANILA with her role in "TOP GUN" and one of my favorite NEW WAVE inspired film classic "SOME KIND OF WONDERFUL". Getting the DVD releases of this trilogy gave me a chance again to watch and relieve the excitement of TIME TRAVEL. Another memories of the EIGHTIES!! Patok din sa mga kabatch kong PINOY who grew up in the era.

Posted by DrStirringRhod at 1:39 PM No comments:

In 1981, I was able to watched this Lucas-Spielberg classic film "RAIDERS OF THE LOST ARK" on wide screen and it was an action packed movie indeed. The two Indiana Jones movies were also great, but I've watched them this time on BETAMAX. The prequel "INDIANA JONES AND THE TEMPLE OF DOOM" was also interesting since the setting is before the stint of Dr. Henry "Indiana" Jones, Jr. on the lost ark. My favorite would be the 1989 "INDIANA JONES AND THE LAST CRUSADE" wherein his mission is to find the HOLY GRAIL and of course HARRISON FORD was with co-stars SEAN CONNERY(Idol sa JAMES BOND!!) and the late RIVER PHOENIX. Well, it's just sad to know that the on-going making of INDIANA JONES 4 entitled "INDIANA JONES AND THE KINGDOM OF THE CRYSTAL SKULL" doesn't anymore include Sean Connery since he was really serious about his screen retirement since 2005. As you recall, Sean Connery played the role of Dr. Jones Sr. the father of Indy and River Phoenix played the young Indy. I skipped the DVD release, but instead decided to get these VCD releases of the trilogy. I can't wait for the fourth episode on wide screen which will be shown next year 2008. Indeed one of the great sequels of the EIGHTIES!!

Posted by DrStirringRhod at 1:03 PM No comments:

THE PROMISE of WHEN IN ROME 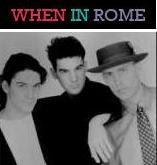 It was early 1988 when I first heard of this band when NU107 played the classic "VATICAN MIX" of "THE PROMISE" then everything was history. WHEN IN ROME was first introduced here in MANILA in 1988 by NU107. MIKE SUTTON informed me that "THE MAN", "THE MYTH" of WXB102 Sir GEORGE FREDERICK got "THE PROMISE" single just after WXB102 went off the air so they weren't able to play it on XB back then. "HEAVEN KNOWS" became the second MANILA hit for this trio from ENGLAND composed of Clive Farrington and Andrew Mann on vocals, and Michael Floreale on keyboards. Their self-titled album sold a lot of copies here in the Philippines and because of their massive success NU107 had invited the band to do a concert here in MANILA on January 1990. I heard the concert commercial on NU107 on November 1989 and with unknown reasons the band just cancelled their MANILA concert. SAYANG talaga!! 99.5RT's 1989 "RHYTHM AND ROCK" format included the extended version of "SIGHT OF YOUR TEARS" on their playlist while DZBM POWER105 played a lot of songs of their self-titled album which also includes the powerful ballad "EVERYTHING". My friend DJ RON SOUTH of LITEWAVE has "WIDE WIDE SEA" as his personal favorite, while my own personal choice would be "CHILD'S PLAY". SULIT NA SULIT talaga ang album na ito for PINOY WAVERS.

I was able to buy their one and only album both on Vinyl and CD format which is seen in the photo together with two 12" Vinyl remixes namely "THE PROMISE" and "HEAVEN KNOWS". Last 2004 the song "THE PROMISE" was featured on the NAPOLEON DYNAMITE film and the band had a recent concert with GENE LOVES JEZEBEL, DRAMARAMA, and A FLOCK OF SEAGULLS who are all also popular here in MANILA.

The Promise Of
WHEN IN ROME!!
-DR. STIRRING RHOD-

Posted by DrStirringRhod at 1:00 PM No comments:

Labels: When In Rome

A friend of mine brought this Philippine released compilation abum entitled "NEW MUSIC PERFECT RHYTHM" at school back in 1986 which made me very curious of the Bands and Artist included so I also got my copy. Personally, I consider this as a follow-up compilation of "IT'S CALLED NEW MUSIC" because of the concept and the art work in the album. This compilation was released early 1986 just before the HISTORICAL PHILIPPINE FEBRUARY 1986 EDSA PEOPLE POWER REVOLUTION which ousted former PRESIDENT FERDINAND MARCOS. A great compilation of bands like LET'S ACTIVE, SMASH PALACE, A DROP IN THE GRAY, which were all introduced by DZBM POWER 105 in 1986. Great tunes also from WIRE TRAIN, LORDS OF THE NEW CHURCH, R.E.M. and EIGHTH WONDER. My personal favorite would be "ANOTHER GIRL" by DIGNEY FIGNUS. WXB102 and NU107 also played most of the tunes in the album. "Happy Birthday" by ALTERED IMAGES made it three weeks in a row as #1 on the WXB102 TOP 10 Most Sequestered Songs in 1986. A great score from the past that PINOY NEW WAVERS would definitely remember.

Side Two:
1) HAPPY BIRTHDAY- Altered Images
2) LOVE MY WAY- Psychedelic Furs
3) EVERY WORD MEANS NO- Let's Active
4) ALL THE SAME- A Drop In The Gray
5) ANOTHER GIRL- Digney Fignus

Posted by DrStirringRhod at 11:53 AM 2 comments:

Pinoy NEW WAVERS would definitely be very familiar with this Philippine released NEW WAVE COMPILATION ALBUM entitled "IT'S CALLED NEW MUSIC". It was released here in Manila in the latter part of 1985 when the NEW WAVE radio war of DZBM POWER 105 and WXB102 was heating up back then. When this was available on the record bars a lot of my classmates and schoolmates were very excited to get their own personal copies, of course that includes me. HE HE HE!! Personally, I consider this as one of the greatest New Wave Compilation released locally. With the bands like THE CARE, APRIL SHOWERS, THE BIG DISH, ICICLE WORKS, I-LEVEL who would go wrong buying this VINYL RECORD for your collection. Definitely, one record that made a mark for the NEW WAVE genre here in MANILA which also made the song "ABANDON SHIP" by APRIL SHOWERS very famous among Pinoy New Wavers which was introduced by DZBM POWER105 and was also played on WXB102 and even made it through the NU107 playlist. It also includes the two bands I've watched performed concerts here in MANILA wayback 2002 and they were CHINA CRISIS and LOTUS EATERS. The LIVE VERSION of "AFRICAN AND WHITE" performed by CHINA CRISIS at READING UNIVERSITY also made an impact on the airwaves. "Big New Beginning" by THE BIG DISH is one of my favorites. The song "The Country Of The Blind" by Faith Brothers also made it big on both DZBM POWER105 and NU107.

1) BIRDS FLY(Whisper To A Scream)- The Icicle Works
2) AFRICAN AND WHITE (LIVE)- China Crisis
3) WHATEVER POSSESSED YOU- The Care
4) OUR SONG- I Level
5) THE COUNTRY OF THE BLIND- Faith Brothers
SIDE TWO:

My Fiance loves Bossa Nova Music so when she saw this compilation entitled "BOSSA NOVA MEETS NEW WAVE" at ODYSSEY RECORDS she bought it for her collection and of course that comes with sharing the music to me. The CD title itself represents the comparison of musical genres that me and my Fiance listen to. It's a hybrid of what music she likes and what music I like. It's a compilation of Common New Wave Hits of the 80s. It is release by Synergy Music Corporation.I find the songs here very relaxing and smooth. Just like the PROZAK compilation CD I featured in this blog before, this CD can be heard best when you're very tired and exhausted from work. All songs here were sung by Female Vocalists that makes it more refreshing to the eardrum. Very interesting compilation!!

This is when Bossa Meets New Wave!!
-DR. STIRRIN RHOD

Posted by DrStirringRhod at 2:10 PM 2 comments: 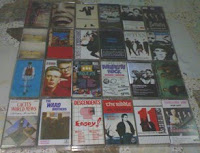 I still have a lot of CASSETTE TAPES in my vaults both the originals and the so-called HouseMixTapes. I treasure these stuffs like I treasure my Vinyl Records and CDs because they've been a part of my soundtripping during those times especially during the 80s. I started collecting CDs back in1990 when my DAD gave me my first CD PLAYER and so these cassette tapes are my alternative to Vinyl Records since it's handy and I can easily play it on my car stereo and in my bedroom and of course my ever reliable SONY WALKMAN because my Turntable is in our Living Room. Luckily, I was also able to preserve these cassette tapes. Nowadays, you just don't see that much cassette tape album releases here in the Philippines. Well, that's how technology evolves, seeing these stuffs going to extinction.

Posted by DrStirringRhod at 1:44 PM No comments:

Here are some ICONS with their corresponding A.K.A.

(Dolby was his nickname)

Posted by DrStirringRhod at 10:48 AM No comments:

THE GIRL WHO SEDUCED THE WORLD- JON SAINT JAMES
http://download.yousendit.com/2FE634AA69C54799

Posted by DrStirringRhod at 12:39 PM No comments:

Happy 2nd Birthday to the WXB102 Internet RADIO!! More Power to MIKE SUTTON and the rest of the 102 FAMILY!!
-from DR. STIRRING RHOD

An email from MIKE SUTTON: 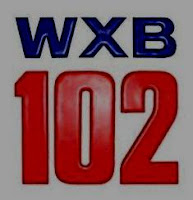 They said we wouldn't last.

They said that WXB 102 couldn't be revived.

They said that The Station That Dares to Be Different had no future online.

And we proved them wrong.

Tune in to the festivities here:

WXB 102 is now the No. 1 highest-rated online radio station worldwide on the dancepunk/80s/new wave charts.

A warm thank you to George Frederick, The Ghost, Julius Caesar, Allan K., the Morning Man, and Cool Carla for all returning to WXB 102 after 20 years absence; to DJ Sandman, DJ Kyde, and DJ Hilary for bringing new blood to the airwaves; to Naughty Natty and Mick Flame (Mickey the Clown) for graduating from WXB 102 volunteers to professional jocks; and, of course, to ALL THE LISTENERS, for tuning in daily to WXB 102. We wouldn't be here without you all.


WXB 102 IS HERE TO STAY. WE WILL NEVER BE SEQUESTERED AGAIN. 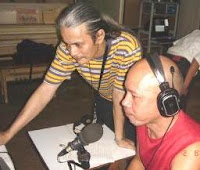 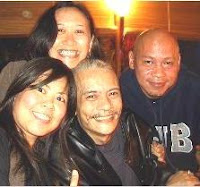 Posted by DrStirringRhod at 10:01 AM No comments: