The Story Of THE DAWN

I first heard of THE DAWN wayback 1986 when WXB102 played the DEMO VERSION of "ENVELOPED IDEAS". THE DAWN was the prime FILIPINO NEW WAVE ACT in the 80s and "ENVELOPED IDEAS "was their first smashing hit and became a FILIPINO NEW WAVE anthem back then. In 1987, ORLY ILACAD of OCTO ARTS finally gave them the necessary breakthrough by releasing their SINGLE and 12" EP of "ENVELOPED IDEAS". The moment the 12" Vinyl Single was released I remember everyone at school back in 1987 went to buy their own copies on ODYSSEY RECORDS of course that includes me. The 12" EP and Single were first released and their DEBUT album followed next. It was definitely a good feeling that finally a FILIPINO NEW WAVE BAND was acknowledged. I still considered the FIRST THREE STUDIO ALBUM RECORDS which they recorded in the 80s as their best works on their entire musical career . It's just sad that TEDDY DIAZ said goodbye very early on the band's career when he was murdered back in 1988. 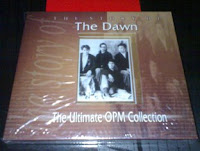 "THE STORY OF THE DAWN" CD is a greatest hits compilation I bought wayback 2001 which was released by VIRGIN EMI that featured the band's hits from 1987-1994. OPM means "ORIGINAL PILIPINO MUSIC". They actually disbanded in 1995 then reformed in 1999 which was followed by a U.S. TOUR in 2000. During the hiatus JETT PANGAN had a SOLO career in 1996 and released one album. In 1997 he formed a band called" THE JETT PANGAN GROUP" which made a cover version hit of a JOHN DENVER SONG "Leaving On A Jet Plane" which made waves in the charts. THE DAWN is still active these days rockin' the current upsurge of PINOY ROCK in the PHILIPPINES. A lot of band line-up changes through the decades and still they make good music and gives great LIVE performances.

Tracklisting "THE STORY OF THE DAWN"

This is
THE STORY OF THE DAWN
-DR. STIRRING RHOD

Posted by DrStirringRhod at 10:15 AM 8 comments:

PROZAC with a "C" is an Antidepressant, Selective Serotonin Reuptake Inhibitor which is a treatment for major depression. PROZAK FOR LOVERS CD is itself a good, relaxing compilation of Classic Rock, Alternative, and New Wave music done in a BOSSA NOVA way. I was in a record bar when the shop was playing the album which caught my attention because the songs that were played were JOY DIVISION's "LOVE WILL TEARS APART", RAMONES's "I WANNA BE SEDATED", SIOUXSIE AND THE BANSHEES's "CITIES IN DUST" in a clear and relaxing versions. I immediately bought the CD!! By looking at the CD COVER I guess this excellent Antidepressant CD is very much related with the drug and the CAPSULE on the WINE GLASS would be a symbol for the entire content of the album. BOSSA NOVA right now here in MANILA is very much in. Agot Isidro started the so-called Bossa Nova Divas wherein a lot would follow like SITTI, SOFIA, etc. PROZAK FOR LOVERS definitely would sooth your mood especially after being stress from work. Covers from NIRVANA, THE CLASH, DAVID BOWIE, BLONDIE are also included in this great compilation!!

Take your PROZAK now!!
-DR. STIRRING RHOD
Posted by DrStirringRhod at 9:49 AM No comments: 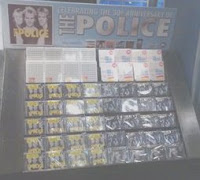 After 21 years in hybernation, THE POLICE are back!!! The Police opened the 49th Annual Grammy Awards last February 2007 in L.A., California, stating, “We are The Police and we are back” before singing “Roxanne.” I consider it an intense comback for this incredible trio that are considered ICONS. UNIVERSAL RECORDS and MUSIC ONE PHILIPPINES pays tribute to the 30th year anniversary of THE POLICE compose of STING "Gordon Matthew Sumner", Andy Summers, and Stewart Copeland(the founder of the band in 1977). The band split up wayback 1986 and I even remembered watching the 1983 Grammy Awards on T.V. when the song "EVERY BREATH YOU TAKE" took the "Song Of The Year" category beating Michael Jackson's "BILLIE JEAN". YUP! Michael Jackson "THRILLER" album almost took home all the awards back then, but missed out with this important category. THE POLICE reunion was followed by a massive World Tour. I hope they would perform here in MANILA. I have watched STING LIVE IN MANILA before at the ULTRA and it was a great concert. He sang songs from THE POLICE and of course his solo works. I can't forget when STING sang "FIELDS OF GOLD"( a personal favorite!) when everyone was raising their Cigarette Lighters up in the air while singing the lyrics. The front act was Pinoy Band THE AMO BAND who also gave a great performance that evening especially with their "BOHEMIAN RHAPSODY" version (Ang Galing!!!). That was only the STING concert that gave me great memories.....what more if we have the original trio here in MANILA. In our dreams! The Double CD Package released by THE POLICE is actually their first Double disc GREATEST HITS format. I still cherish up to now my Vinyl Record of their 1986 "THE SINGLES" compilation.
THE POLICE..........a great band!!!

Posted by DrStirringRhod at 7:57 AM No comments:

THE GREATEST ALBUM COVERS OF ALL TIME

Late last year I bought this huge book entitled "THE GREATEST ALBUM COVERS OF ALL TIME". As a music enthusiast and an avid collector of Vinyl Records I'm very much curious about this book and the author's view of what the greatest covers are. I must agree on some choices and disagree also to the other choices. Well, my favorite entry would be NEW ORDER's LOW LIFE album cover. What an excellent choice since I'm an avid fan of this band fronted by Bernard Sumner. NIRVANA's smashing "NEVERMIND" album cover definitely made it also to the book and the SEX PISTOLS "NEVER MIND THE BULLOCKS". Very interesting book!!

Posted by DrStirringRhod at 8:36 AM No comments:

I'm a great fan of Ian Fleming's secret agent JAMES BOND 007. Two years ago I bought this VCD(Video Compact Disc) collection in the now defunt TOWER RECORDS. VCD is a very common video format here in the Philippines aside from the DVD. My favorite actor would be Sean Connery and my favorite theme songs from the original soundtrack would be none other than A VIEW TO A KILL by DURAN DURAN and THE LIVING DAYLIGHTS by 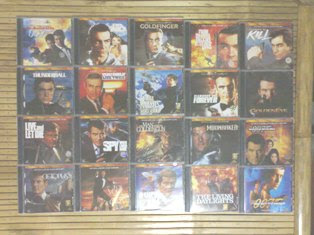 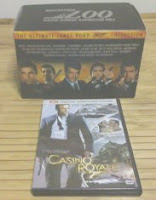 Never Say Never Again (1983) doesn't count as an official JAMES BOND movie because it wasn't released by UNITED ARTIST. This movie which starred SEAN CONNERY was released by WARNER BROTHERS. Plans of making another BOND FILM next year 2008 is on the works and expect another addition on my collection. 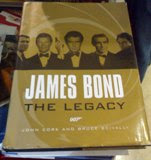 Here's a great book about JAMES BOND that has the history and inputs on the origins of the film and it's success.

Returning From The Journey POWER105

With the massive success of NU107's test broadcast , DZBM POWER105 then decided to bring back their NEW WAVE format on DECEMBER 1987. Now, another NEW WAVE RADIO WAR has just began that would stretch up to the early part of the 1990. It was also a healthy competition like the previous XB vs. BM and the PINOY NEW WAVERS definitely benefitted again. The EIGHTIES!!! What a great decade in music!!!
Posted by DrStirringRhod at 1:28 AM No comments:

1987 was a memorable year for NEW WAVE here in MANILA. On JUNE 9,1987 WXB102 officially bid farewell to all their avid fans and listeners. DZBM POWER 105 new wave format that time was already non-existent. Then came the month of NOVEMBER when NU 107 officially went on test broadcast playing NEW WAVE HITS that was both mainstays on XB and BM but with a lot of additional songs and bands on it's playlist. It was UNDAS time in MANILA when Filipinos visit the cemeteries to pay respect to their dead love ones. I was lucky to be able to hear their first broadcast while on my way to LOYOLA CEMETERY. Actually a lot of people thought that XB has just resurrected from the dead.....they were all wrong because it was a totally different radio station headed by ATOM HENARES and MIKE PEDERO. As the NU DJs would say "THIS IS THE HOME OF NEW ROCK NU107 is DWNU FM in MAKATI" . NU107 was born.

..first NU107 logo photo was taken from my old NU107 sticker on my vaults.

NEW WAVE music was the in-thing during the 80's in MANILA. Of course, PINOYS were very much into this kind of musical genre that rocked the entire nation. There were two influencial radio stations which brought NEW WAVE music at it's peak. Although during 1980-1984 this genre have invaded Manila's FM stations, these two radio stations:WXB102 "The station that dares to be different" and POWER 105 DZBM FM "THE POWER STATION" were the ones who really dug deep into the music. In 1985, both stations started the so-called NEW WAVE RADIO WAR. XB going on the FM frequency dial 102.7 and BM on 105.1. I've tuned in to both radio stations and because of them I really got into collecting NEW WAVE/PUNK stuffs from the original Vinyl Records,Casette Tapes,CDs, VCDs, DVDs. A great experience indeed! THANK YOU VERY MUCH XB and BM.
Posted by DrStirringRhod at 9:22 AM 1 comment:

Hello Everyone!!! Welcome to my humble blog!! Let's talk about Music, Movies and anything under the sun. Hopefully you'll enjoy and have fun. -Dr. Stirring Rhod
THIS IS MY HOME! :-)
Posted by DrStirringRhod at 8:56 AM