It was late 1983 when I saw this Dance Contest in the Longest Running Philippine Television Noon Time Variety Show "EAT BULAGA" called "RENO'S MODERN DANCE CONTEST" and was amazed on the music and dance steps of the contestants. Well, this was the year when NEW WAVE/PUNK ROCK was becoming a hit here in MANILA just before XB, BM, and NU opened up the minds of PINOY to a different form of NEW WAVE in 1985-1990. I was also just starting to be interested in buying Vinyl Records during those times so when I saw this PHILIPPINE VINYL NEW WAVE COMPILATION entitled "RENO'S MODERN DANCE" on the record shop weeks after the said contest on EAT BULAGA was concluded then I remembered the music played on that contest which made me bought the record. Little did I know, that a VOLUME TWO was also released and of course just to have it on my collection I also bought the second volume. 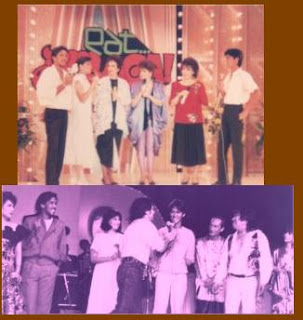 The music of the compilation was pretty good and the most common song being performed on the contest was the classic hit "LIES" by THOMPSON TWINS. YUP!! Majority of them danced to this tune which probably was the reason that the song was a massive hit here in MANILA back then. "LIES" was also the song that broke THOMPSON TWINS into both UK Singles Chart and the U.S. Billboard Hot 100 back in 1983. This song was from their third album Quick Step and Side Kick simply called Side Kicks in the U.S. HmmmP!! LIES? Well, sad to say a very common thing in the recent political arena here in the Philippines. Haaaaay!! KABAYAN, Let's just sing to these people "Lies lies lies yeah (they're gonna get you), Lies lies lies yeah (they won't forget you)." Naaah!! Some things never change. There were two other songs that were used by the contestants and these were "DON'T GO" by YAZOO and " "JUST CAN'T GET ENOUGH" by DEPECHE MODE. Both songs also had their share of airplays on MANILA radio. I also remember this YAZOO song being played on the classic 80s movie of Sylvester Stallone entitled "Over The Top" which I watched on Betamax back then. Why RENO'S MODERN DANCE? Well, during those times there was this RENO'S Jeans which I bought once and It has the same "HAT LOGO" of the said PHILIPPINE NEW WAVE Compilation released by OCTOARTS INTERNATIONAL INC. under NEW YORK RECORDS back in 1983 so I guess It's about that jeans. I also noticed that most of those who performed were wearing hat and jeans. Hmmmp!! I guess that's it!! So nothing to do with a brand of Liver Spread very popular here in MANILA. He He He!! MEMORIES INDEED!! 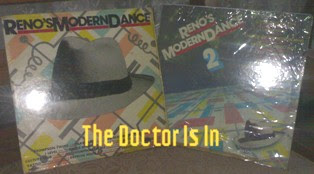 Volumes One And Two

So instead of posting the Tracklist of both compilations I will just mention the 11 NEW WAVE BANDS that were included.

Some of the bands have two or more songs included on both compilations. Volume One has 12 songs in it and Volume Two on the otherhand has only 10 songs. This was compiled and coordinated by STEVE BEAVER and graphic design by ILLUSTRATION WORKSHOP. Only Volume One was featured on the contest because Volume Two was released few weeks after the dance contest was finished and I guess this was because of the success of the first one. The song "LIES" are present on both volumes. The Single Version on Volume One and the Extended Version was on Volume Two. GREAT COMPILATION INDEED!!

I included Four MUSIC VIDEOS on this blogpost to recapture the times.

This DEPECHE MODE song remains to be a PARTY CLASSIC for PINOY NEW WAVERS up to now, they "Just Can't Get Enough" dancing with the tune.

Well, I hope you enjoyed my blogpost as much as I did while conceptualizing and posting it. THANKS AGAIN!!


LIES LIES LIES yeah
(They're gonna get you)!!
-DR. STIRRING RHOD-
Posted by DrStirringRhod at 12:09 PM

Bro, I think I have this on cassette, hehe. I also have another comp with XTC's Generals and Majors and Martha & the Muffins' Echo Beach. I forgot the other songs in that compilation but I know there were other good songs as well. And then there's Times Square OST which was heavily advertized in Eat Bulaga. Last thing, I think Gary Numan went here promoting Cars and he was also a guest in Eat Bulaga. I'm not very certain about it since I was in third grade when this happened, everything is hazy but I pretty sure he went here. Correct me if I'm wrong.

Yo PUNK ROCK DADDY!! The compilation your talking about regarding XTC and MARTHA AND THE MUFFINS was also an exclusive PHILIPPINE VINYL released entitled "THE BEST OF NEW WAVE PUNK ROCK". YUP!! You're very correct regarding GARY NUMAN visiting EAT BULAGA because I remember the DANCE MOVES for the song "CARS" which was also introduced on EAT BULAGA and he was promoting this single back then. I have also a Philippine Vinyl Punk Rock Compilation of it but I loss the Inlet Pictures of the said "CARS" dance moves also included when you buy the record. WOW!! You took me also for a trip down memory lane there buddy. He He He!! THANKS for the comments KABAYAN!!

Archived from my CHATBOX:

this is the song im looking for

Hi NB!! WOW!! I remember that "Mirdor Rock"! Especially the lyrics "I am a computer, I am reprogram to dance, I am here to hypnotize you". Wheew!! Penge mp3 copy NB baka meron ka jan. Do you still have that Philippine Strut Vinyl Compilation? I can't find my copy anymore on my Vaults.

I found this blog by accident and was very amused that you guys were discussing Reno's Modern Dance. I'm also glad that someone mentioned Mirda Rock because I've been looking for that song for ages. Student Canteen also had their own New Wave moment, which was set to compete with Eat Bulaga, Body Punk – which was Devo's Peek A Boo was from Eat Bulaga, Punk Jazz- the student canteen version was Lime's Wake Dream.